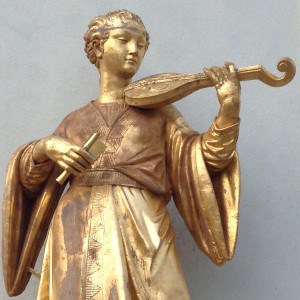 This month has already begun splendidly with a day in Potsdam to reflect and pray – with many wonderful small encounters in between.

I am excited for everything that this month will bring. Of course, we never know what will happen and whether we’ll sprain our ankle or if something bad will occur. But, if everything goes according to plan, this will be a good, full month.

– Fitness program: In our world in general and when rebuilding a ship from the 50’s specifically, our livers often have to work very hard. For this reason, I am going to do a liver-cleanse (first a classic one with Glauber salt + grapefruit and oil, then later with milk thistle) and do a whole-body detox of a garlic-lemon tincture (sounds terrible, but it’s not so bad – and it’s antiviral and energizing).

– Learning new things: I wanted to participate in a class at the Kingly Garden Academy about how to create pots for plant seeding. I will need this in the future because I would like to grow as much food as possible myself on the ship. I misunderstood it – it was more like a vending event. But I still learned some things.

– Receiving inspiration: Transforum is taking place in Berlin on the 6-8 of March. This is a conference that occurs every two years and deals with the question of how we as Christians can positively shape our society. I am still thinking about many of the inspirations from the last Transforum. I am thankful for this inspiring conference – participation is free, by the way, in order for people who can’t afford it to participate. And people can decide to come last minute as well.

– Giving inspiration: After the women’s pamper days were so nice for both participants and speakers, we planned two sequels. On March 14 and May 9, the theme is “Spring into Abundant Life” at 8pm in the Gemeindehaus des SV.  I am already excited to see the wonderful ladies again. In the afternoon, we are offering the option to book a coaching session with me – a special service for those for whom Berlin is too far away and telephone coaching is not a good option. At the end of March, there is another women’s cafe in Britz with me and the theme is SWING.

– Writing. There are several things laying on my desk. In addition to all of the organizational tasks that come with running the publishing company and building the ship, I’m writing two more inspirational booklets: Friendship and Grief. I would also like to begin work on the new online course, IDA – In deinen Armen.

– Ship: Of course: continue building with all my strength and as much wisdom as possible!

– Men-Teams on board: On March 14 (Treptow Church) and on March 22 (Lukas Church) a whole bunch of men are going to energetically help with the ship. I am looking forward to showing the ship to the “guys” and making an impact with them! In addition, a “mixed” team (1 man/1 woman) is coming for two days – also wonderful!

– Women in Paris. This is probably the biggest surprise. For months, I’ve been occupying myself with the life of Coco Chanel, probably the first modern woman who out of her own strength – she came from bitterly-poor circumstances – built a worldwide undertaking. The wish awoke in me to visit the places of her work, but it was more of an idea than a plan. With the ship, I have more than enough to do and to pay for. It was just a silly idea until I began to research pictures for the inspirational booklet. The pictures cost 180 Euros each! This is way over the budget. But we still need 3-4 expressive pictures. A plane ticket to Paris only costs 120 Euros – much cheaper. In addition, I haven’t taken a real vacation in over a year – if you don’t count the moving of the ship (4 days) and Antwerp (3 days during which I was ill!).

So, I asked a friend if she was interested in coming to Paris with me (she’d pay for herself). She wrote back, “For the past few weeks, I have been working on cleaning, organizing, and clearing out the house of my recently deceased great-aunt. I really need a change! And I have friends who have an apartment in Paris. They live in the middle of the city – only a 15 minute walk from the Chanel head office!”

Accordingly, I am looking forward to this exciting month!