Getting rid of to-dos

When I cry out to God he often answers – through books.

In the last days as I was thinking and praying about what I most wish for 2017 there was one thing I longed for most.

Less stuff in my head. 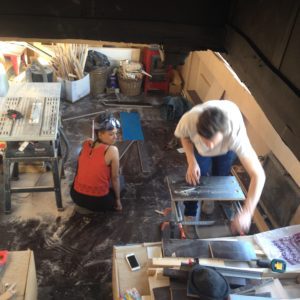 But there was more to that. There was an incredible tiredness in my brain. Just the thought of thinking about something made me feel exhausted. And I felt that somehow I was doing something wrong that took my energy. And creativity. And to some extend the joy in life.

I found the answer – or at least a big  part of it in an interview of the Bergman Leadership Podcast (20 Min Interviews with interesting  people, often authors) The Interview mit Christine Carter inspired me and on her page she had a link to an  Ebook, that promises strategies that would free up to one day per week.

In a nutshell she sais that our brain is craving for novelty as much as it is craving for food. If there is no outside stimulus it starts to search inside for new connections, processes things and  comes up with new ideas.

However if we constantly give the brain outside stimulus (email, Facebook etc.) it has the short moment of “happiness” that satisfying an addiction gives (not the same emotion as true happiness that satisfies you deeply, whereas the act  of fulfilling an addiction only leaves you hungry for more).

I would like to add: Because this habit of constantly looking for outside inspiration the brain has no real time to process. And thus the brain gets exhausted, deeply exhausted. So exhausted it does not even have energy for things that are true fun and inspiration (She did not say that in the interview, I just describe my experience).

Shorty before that I had read that German employees check their emails every five minutes, but believe they do it far less often. Yikes. Ouch. I will not confirm that my email checking habits contributed to the statistics nor deny that I checked my emails every … minutes. Yikes.
Ideas to free your time

She recommends (among other things)

So I went through all the notes I had written to myself what I should do and ki
cked things out. A 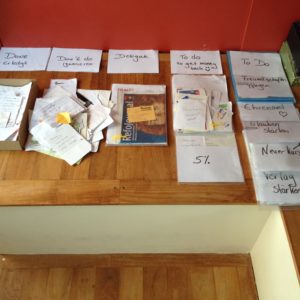 nd sorted the rest into the five priorities for 2017 – that part was easy as I do sort things by category anyhow. All in all deeply satisfying feelings

Going through this stuff I also realized that I had a ton of things in the back of my mind that never made it on one of my  to do lists, but are still there as a “you should”: i.e. I should go through my jewelry and decide what I no longer wear and would like to give away and through the books that did not fit into the shelves and the towels and pots and … I pulled all of these out of the back of my brain and started a new category.

I know it will be challenging – especially the detox from Internet and Social Media. But rewarding. Weeding out my to-dos, resisting “quickly checking what is happening in my life (i.e. did I get new messages  or book orders) or in the lives of others is a challenge, but I can sense how much it will strengthen and ease my life.

Just thinking of it makes me feel relieved.*

Thanks you, God and thank you,  Christine Carter. 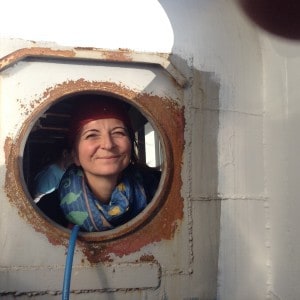 Yes, still there. And still building the ship.
Finances remain a challenge. I got two big and some smaller gifts – that helped to pay the huge bill for annual rent + electricity + service.
However I have another 10.000 Euro challenge ahead of me…the heating system of the ship: Ovens, hot water tanks and so on.
In the midst of the challenges I am amazed at God´s faithfullness. I guess that now about 80% of the ship is paid for.
I had to take loans for about 20% of this. So 60% of all costs were provided for through my own income and lots of gifts. God was and is faithful.
If you want to help you can use paypal: info@down-to-earth.de or ask me for my bank details. And you can come to Berlin and join the process! 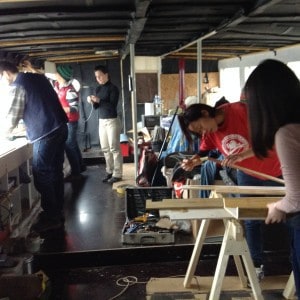 Slowness of progress: For a visionary like me slow progress is almost killing… Things move on the ship. We built the bathroom, put in floor heating system, continue to renovate the decks and put in insulation, put in more walls…
But it takes a LOT of time. I certainly do not like this…. and I do trust but also cry out to God at the same time to send helpers and finances to speed up the process…
Picture: One of the great days when lots of helpers were on board.