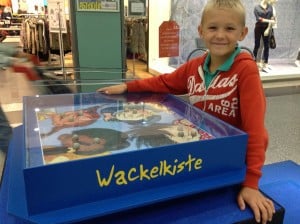 – Was I alive today?
Yes! And how! The best moment of the day was when I successfully got all 12 balls into the faces of the Astrid Lindgren figures with my new friend, Lukas (3rd grade), and he asked me at the end, “Will you be here again tomorrow?” Heartwarming.

– What new thing have I discovered about life?
When a water pipe is clogged, it doesn”t necessarily mean there is grime in it. I was on board and was trying to unclog an overflow pipe from the roof and was poking around in it. And I was surprised when instead of grime, a huge spider came out. NO, I did NOT scream! But only just! Screaming is only useful when someone else is nearby who can hear it. It”s only half as fun alone.

– What new thing have I learned about myself?
It”s really difficult for me to go along when someone is whining and complaining. Today, the sandblaster told me how difficult it is to get the coating off of the floor of the main room. He said this in a whining undertone that automatically released in me these feelings:

– I have to do something so that he will be doing better.

My auto-program offered to pay him more (before the freecar racing car racing games mobile rest of me even had a chance to think about it), even though we had already agreed upon a price. Ouch. That wasn”t necessary. How someone feels is really their own problem. He could have said instead, “Gosh. This coating is being difficult. But I, the MacGyver of Sandblasters, will be the master of this project.” And he could have felt like a hero. I hope to get something from life for the expensive premium I paid… What I already know in theory – that I am not responsible for the feelings of others, but only for my own behavior – I hope I can internalize this even more!